Electric Vehicle - The biggest revolution of 21st Century | What is the future of Electric vehicles in India?

Over the past 200 years, the world has witnessed some amazing transformations. And talking about transformation, one industry that has revolutionized the modern world is Automobile.

It all started in the year 1901 when Mercedes received the credit of being the 1st modern motorcar. Before that, the major form of transportation was horse. Later, Mr Henry Ford innovated the mass production technique for car manufacturing. Since then, the US, Germany and Japan have been the biggest players in Automobile industry. In just 100 years, the car industry has innovated leaps and bounds. But, that was not the end!

The 19th century cars used an “Internal Combustion Engine” or ICT that required petrol or diesel. But there was an alternate technology which used “electricity” powered by a battery. Although, due to many reasons, electric cars never became mainstream in the 19th century. Until, Tesla introduced its car “Roadster” in 2008.

With that, Tesla began a new revolution in Automobile industry. This could also be called as one of the biggest revolutions of the 21st century. I am talking about the rise of the Electric Vehicle industry.

After the US, Japan and Germany dominated the petrol/diesel car market all over the world, everyone is in a race to capture the Electric vehicle market to rule the 21st century automobile industry.
If we look at the current state of electric car sales globally, the total sale of electric cars in FY19 stood at 2.3 Million units. This number was in the few thousands in 2013. So within 7 years, the electric vehicle sales have grown multiple times.

In Spite of such huge growth, only 2.5% of the world’s passenger vehicles run on electricity. So you can imagine the kind of growth prospects all over the world.

There are 3 major global markets that represent 94% of total EV sales: It is US, Europe and China.

If I ask you, which is the biggest global market of EV, you would probably answer US, right?

As per report from McKinsey, the EV market is going to explode in the next 10 years.

That is just crazy growth numbers!

Key Players:
The global electric vehicle market is dominated by major players such as Tesla (US), BYD (China), BMW and Volkswagen (Germany), and Nissan (Japan).
Tesla captures around 28% of total EV market in the 1st half of 2020. There is high consumer demand for Tesla's cars due to their innovative technology, modern design, and high performance.
It is followed with Nissan and Volkswagen with around 10% market share each and then BYD with around 7% of total market share.

EV represent less than 1% of the total automobile market in India. India is predominantly a 2-wheeler market with more than 80 per cent of ICE sales coming from 2 wheelers. The penetration of EVs in the four-wheelers (4W) segment has remained extremely low at ~0.1 per cent. 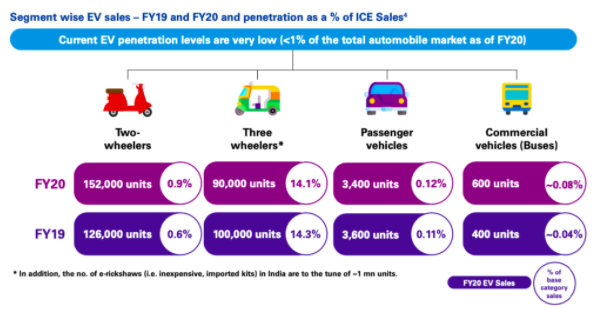 Policymakers in India have been actively pushing. EV adoption in recent years. Government think-tank NITI Aayog has specified that Faster Adoption and Manufacturing of Hybrid and Electric Vehicles (FAMEII) and other policies supporting electric mobility are expected to push EV sales penetration to 30 per cent for private cars, 70 per cent for commercial cars, 40 per cent for buses and 80 per cent for two wheelers (2Ws) and three wheelers (3Ws) by 2030.

Based on an analysis of key enablers for EVs, KPMG in India expects 25 to 35 per cent 2W penetration, and 65 to 75 per cent in 3Ws by 2030. However, 4W passenger vehicle (PV) electrification is expected to lag, with 10 to 15 per cent penetration in the personal segment and 20 to 30 per cent in the commercial one by 2030. About 10 to 12 per cent of the overall market for buses is expected to be electrified by 2030.

Clearly, there is a bright future prospect for EV in India!

With this, we have come to the end of part 1 of the article.

PS: If you want to learn every aspect of fundamental analysis of stock and other important concepts of personal finance, you can explore my video course on "Everything about money management".

EXPLORE COURSE
Unable to Login? We are here - hello@sahilbhadviya.in
Cart ( Items )
There are no items in your cart
Add More